Have you received a Single Justice Procedural Notice for Speeding? 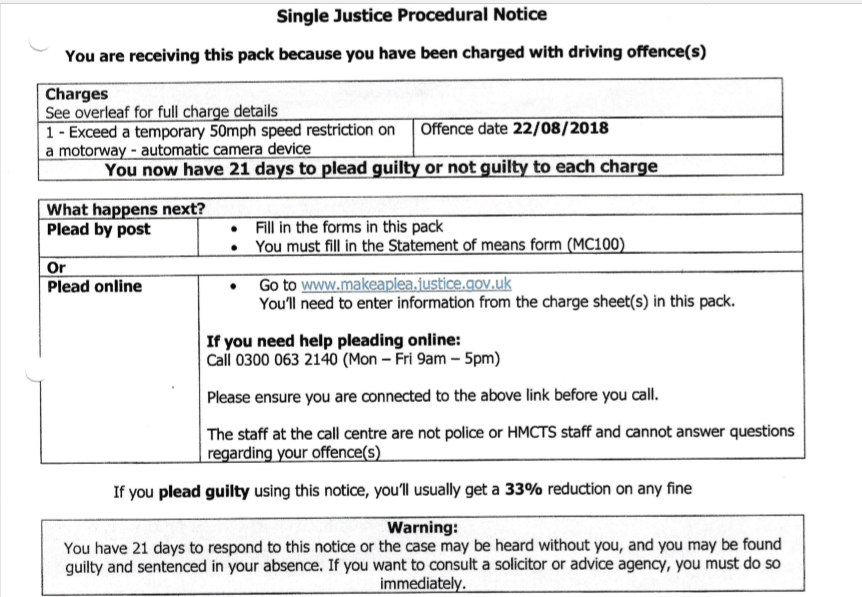 If so, how should you approach this?

Let’s say, for example, that you admit speeding in excess of 30 mph above the speed limit.  You are extremely anxious not to be disqualified from driving as your job depends on your licence (not to mention the inconvenience of loss or licence and the risk that your insurance premiums could, potentially, double if you fail to avoid a ban).

You have the option of indicating a ‘guilty’ plea and seeking to be sentenced at court (if you are of the view that you will obviously be required to attend for consideration of a ban anyway then you may wish to take this option).  You can then plead for your licence at court.

However, if you are of the view that there is an outside chance that the Single Justice might be prepared to sentence you to 6 penalty points and a fine without the need to attend court you may wish to indicate a ‘guilty’ plea, opt to be sentenced without court attendance and complete the mitigation section of the form setting out those matters which might just tempt the Single Justice not to require you to attend court to be sentenced.

In this case, how should you go about setting out your mitigation?  This is problematical for most people as often the factors which they believe stand in their favour actually make it worse from the court’s perspective.

However, if the Single Justice actually decides, based on the mitigation put forward on the form, not to require the Defendant to attend court this would usually mean that the motorist has avoided a ban and the need to attend court in one go.  So the costs of a court appearance and a ban will have been avoided just by skilful completion of the form.  If, however, the motorist adopts this approach and is then required to attend court he/she has lost nothing (so long as the mitigation on the form has not made his situation worse in the eyes of the court).

At Kent Traffic Law we are expert in assessing your prospects of being sentenced without being called to court.  If there is a chance of being sentenced without being called to court based upon a persuasive plea in mitigation on the form then we know how best to word the form in order to maximise your chances.  On the other hand, if you are called to court in due course for sentence, the mitigation on the form will have been completed in such a way as to ensure that the mitigation put forward in court is completely consistent with what has been put on form (thereby enabling your advocate to submit that you have been consistent with your mitigation throughout).  Thus your prospects of avoiding a ban in court will have been maximised in any event.

We specialise exclusively in motoring offences.  If you would like help in completion of forms and preparation of mitigation in an effort to avoid a ban don’t hesitate to get in touch.

2 thoughts on “Have you received a Single Justice Procedural Notice for Speeding?”